The 2014 Consumer Task Force will spend the year learning about the newborn screening system from a national, state, and local level as well as hot-topic issues such as the retention of dried blood spots and how social media can help spread awareness. The group will use this information to create outreach projects to educate and engage others in their community about newborn screening. 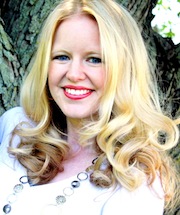 Kelsey Baker (Waverly, IA)
Kelsey is a school psychologist who works with children with educational challenges on a daily basis and did everything possible to give her own children a healthy start. However, she was shocked when Brody, her son, was diagnosed with profound Biotinidase deficiency at one week of age in 2011. Without Iowa’s newborn screening test, Kelsey would have been completely unaware of Brody’s genetic deficiency, and the consequences of being untreated would have been devastating. Since Biotinidase deficiency is 100% treatable with early detection and continuous treatment, Brody is expected to live a completely normal and healthy life. Newborn screening is crucial to every family as every child’s life, like Brody’s, counts!
Over the last two years, Kelsey and Brody have been involved in promoting newborn screening and were featured on a Big Ten Network documentary as well as a commercial highlighting the importance of newborn screening with University of Iowa’s Hygienic Lab. In addition, Brody was featured on the Jumbotron in Time’s Square educating New York City about newborn screening’s impact on families. Kelsey and Brody also traveled to Des Moines to be present when Governor Branstad signed an official proclamation celebrating the 50th anniversary of newborn screening and stating September as Newborn Screening Month in Iowa. Kelsey is excited to be part of the Consumer Task Force and plans to continue advocacy efforts.

Anquineice Brown (Chicago, IL)
Anquineice currently serves as the Program Coordinator at the Sickle Cell Disease Association of Illinois (SCDAI) which is a community-based member organization of the Sickle Cell Disease Association of America. In 2009, Anquineice graduated from Northern Illinois University with a Bachelor of Science in Biology and a minor in Chemistry. She is currently a Master of Public Health degree candidate, expecting completion in May 2014.
Anquineice's interest in newborn screening began in 2011 when she began working at SCDAI as the Outreach Coordinator for a HRSA-funded newborn screening grant. This experience was not one she was particularly familiar with, but Anquineice understood the importance of genetic inheritance, educating, and advocating for those that are unable to advocate for themselves. One thing she has learned is that, "We must challenge who we think we are in order to discover who we were meant to be."
Anquineice has deep interests in pediatrics, hematology, mental health, quality improvement, and community health. She married her college sweetheart, they have a dog, Ginger, and love to travel.

Jordann Coleman (Concord, CA)
Jordann was unaware of the true impact of the newborn screening system until her second child was born in November 2012.  Shortly after her son, Carter, was born, the family learned he had a positive screen for Maple Syrup Urine Disease.  Thanks to the early diagnosis and treatment, Carter is thriving and the family is effectively managing his illness.  Jordann feels so fortunate to have had Newborn Screening work for their family, she has been inspired to become an advocate and make sure other families are able have the same positive experience as her family.  Jordann’s first advocacy experience happened in September 2013 on Capitol Hill when she lobbied on behalf of the Newborn Screening Saves Lives Reauthorization Act of 2013.  Jordann looks forward to serving on the 2014 Consumer Task Force and taking her advocacy efforts to the next level.

Denise Devine (Hadley, MA)
Denise is a parent, wife, aunt, cousin, business owner, support group leader, fundraiser, friend, mentor, and involved in her community in many areas.  Denise and her partner chose to raise their children in a small community that invests and looks at each child as one of their own.
Denise's interest in newborn screening started when her children were diagnosed with Fragile X Syndrome.  Her family had no history of mental impairment on either maternal or paternal side.  Fragile X syndrome (FXS) is a genetic condition that causes intellectual disability, behavioral and learning challenges and various physical characteristics. Though FXS occurs in both genders, males are more frequently affected than females, and generally with greater severity.  Denise says she asked many times, "Why is Fragile X not on the standard test for newborns?" and interest in this subject continued for her.
Denise feels that information provided to parents can shape and change the lives of their children with a genetic condition.  She thinks, generally, parents that get a diagnosis would rather have it sooner than later. Denise states, "A website, such as Baby's First Test, can inform families and health care providers about the newborn screening experience as can printed materials or in person explanation. This can ease minds of families during the newborn screening experience.  I hope to learn more about this important subject in 2014."

Deborah Haupert (Nesconset, NY)
Deborah is a mom of four and a grandmother of three. She has always been active in the lives of her children and has a deep faith and a strong love of family, including a large extended family. Deborah loves animals, especially cats and rescue feral cats.
When Deborah's grandson was born with Cystic Fibrosis (CF), her interest in newborn screening was also born. Having learned that 1 in 29 people are carriers of CF and most are unaware of it, as her daughter and her husband were, Deborah is driven to help others be aware of CF and how it can be detected. It is her firm belief that every state should include, in their newborn screening brochure, information about what a carrier is, that family history does not have to be present to have or be a carrier of CF, and that newborn screening is not a diagnostic test for CF or a carrier screening. Deborah says, "I was raised to give to and help others and have tried to live that way. It is my hope that through my involvement with the Consumer Task Force on Newborn Screening, I can raise awareness of CF and carrier screening and help other families."

Sandy LaPrad (Midland, MI)
Sandy's interest in newborn screening began 13 years ago when her oldest daughter was diagnosed by newborn screening with Classic PKU. Since her birth and diagnosis, Sandy has had the opportunity to work with the newborn screening staff at the state level as the Newborn Screening Parent Consultant for several years and really understands just how important screening is to every family.
Sandy launched an information sharing website, www.michiganpku.org. She also founded Michigan PKU & Associated Disorders, Inc (MiPKU) a 501c3 non-profit, which helps bring metabolic families together for support, education and fun. MiPKU holds an annual fundraiser in which the funds are donated directly to the Metabolic Clinic at Detroit Children’s Hospital to assist Michigan families with diet needs as well as donating a portion to the National PKU Association for continued research. Sandy's daughter was also diagnosed as a Type 1 Diabetic at age 6, a very rare combination with PKU.  Her youngest daughter, now 11, would have benefitted from the upcoming pulse oximeter screening as a newborn, as she was born with a cardiac anomaly. As an RN, Sandy works at the health department and is able to speak with nursing students about the importance of newborn screening and living with children with chronic diseases. Sandy's family participates yearly in a “Families as Teachers” panel at Wayne State University where they are able to share their story as well as challenges with medical students during their genetics rotation. Sandy looks forward to serving on the 2014 Consumer Task Force on Newborn Screening and hopes to expand the teaching of newborn screening to many more students entering the medical field.

Find more information about a specific condition or state

What your state offers

Have a question that’s not answered on Baby’s First Test? Send it to our experts.