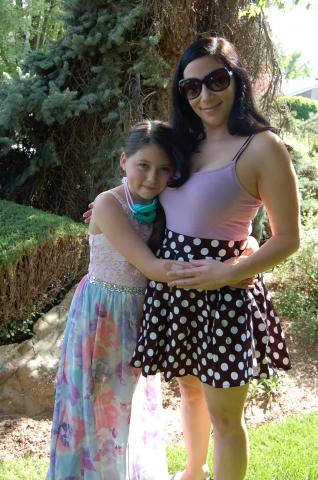 Alenna standing with her mom.

I was so worried during my pregnancy that something was going to go wrong with my child. I had a cousin with Cystic Fibrosis, so I immediately scheduled blood tests to see if I was a carrier. Nope, not a carrier. Phew. I still had a nagging suspicion that something was amiss. I kept it to myself knowing I would have ultrasounds coming to help diagnose any issue that may arise. Each ultrasound showed my baby being healthy. Phew. I still could not shake this feeling that something was not totally right. I finally told a few people of my suspicion. With no evidence to the contrary, my friends and family chalked it up to me being a nervous first-time mom.

Just after midnight on Martin Luther King Day, my water broke. The labor was somewhat uneventful, besides my baby's heartbeat kept slowing down. The nurse would come in and reposition me to get the baby's heartbeat back to normal. I eventually had my beautiful daughter, Alenna. Through a haze of lack of sleep, pain of labor and delivery, and physical exhaustion, I see my parents holding my beautiful baby girl up to get a good look at her. She was perfect. Everything went right. She wasn't rushed off to the NICU, she had all ten finger and toes, she was beautiful. I secretly gave a sigh of relief thinking - maybe, just maybe - I had been worrying for nothing.

Alenna and I got to know each other over the next few days in the hospital. She didn't cry much, latched really well, and already was holding her head up. On our last day at the hospital, the pediatrician gave Alenna a clean bill of health, but said her jaundice levels were on the cusp of being high so he wanted to check her Bilirubin levels on Friday. While I was signing all the papers to check out, Alenna started to fuss a bit, so to save time I asked my mom to give her a bottle of formula. Alenna ate maybe an ounce, then promptly projectile vomited across the room. We were shocked. I didn't even know a baby could projectile vomit. Just as suddenly as she had projectile vomited, my baby was back to normal. We decided to just shrug it off as odd. As the days progressed, she was a little more yellow than before and had diaper rash so bad her skin was peeling off. Odd, but nothing alarming. I was finally relaxing into the idea that my baby was perfectly fine. Totally healthy...

It had just taken Alenna all of five days old to check her Bilirubin levels when I got the most fear-inducing call I have ever received. I only clearly remember one thing that she said, "You need to take your baby to the hospital now. She could die. She might have Galactosemia. Stop breastfeeding now. I've already arranged a meeting with your pediatrician." I can't even explain the fear I had...My baby could die from a life-threatening disease.

I had never heard of Galactosemia. Alenna looked fine, but we got more blood drawn right away. I talked to the pediatrician and he informed me that Galactosemia was a rare metabolic disease, and left untreated babies can die within 10 days after birth. There was no cure for Galactosemia - only diet. The diet restricts all dairy including mother’s breast milk, so she had to be switched to soy formula right then. Luckily, the pediatrician just happened to have samples for us to take home. Alenna was so sick, and I didn't even know. She was already exhibiting signs of Galactosemia - distressed heartbeat during labor, projectile vomiting, diarrhea, and jaundice. If the newborn screening hadn't detected her Galactosemia, she very well could have died. I am so thankful that I still have my beautiful shining star - Alenna.

About this condition
Find more information about